International Men’s Day (IMD) is celebrated on 19th November the world over.

In the recent years, it has become common practice to neglect, ill-treat and demean men in the society.  Male bashing (both physical and verbal) and portrayal of men as villains, idiots and inferior creatures is seen as an innocuous way of increasing profits of media houses and other businesses. Discrimination of men under law and violation of their human rights have become synonymous with empowering and protecting women.

Undermining the positive contributions of majority of men and exaggerating the misdeeds of a few has serious impact on the psyche of men and the self-image of young men and boys. Discrimination against men in areas of social services, social attitudes, social expectations and law is very demoralizing to the common men who lead decent, honest lives.

International men’s day is about celebrating and honoring men in our lives for all the contributions, services and sacrifices they make for the well-being of the family and society.  It is an opportunity to revive respect towards men and improve gender relations. It is an occasion to promote positive male role models, to reinforce the self-esteem and pride of young men and boys about being male. It is a day to remind everyone of the fact that men are human too and that they desire and deserve love, care and respect just as much as women do.

In an attempt to shed light on the various issues affecting men, All India Men’s Welfare Association (AIMWA) is organizing a conference where experts in various fields will share their observations and recommendations. (See invitation for details!)

The National Family Health Survey does not consider men’s health important – enormous focus on women and children, and the mention of men only in relation to how they should contribute to the health and welfare of women and children, clearly indicates the apathy of the Government towards men’s health. No funds are allocated to conduct research on or develop remedies for diseases specific to men such as prostate or testicular cancers.  Since men define their lives largely by their professions and protecting and providing for their families, they tend to ignore illnesses, lead less healthy lifestyles than women, miss getting medical attention in time, and as other stresses in life increase, the diseases catch up with them. Men are more likely to die from heart disease, prostate cancer, stroke, infectious diseases, accidents and suicide. Males have a higher overall mortality rate than females at all ages (roughly 1.6 times greater). It is necessary to understand the genetic, environmental or age related illnesses which can affect men, and provide them with insurance to get the right kind of medical attention at the appropriate time.

Men as individuals and as a group are expected to protect not just their own respective families, but also, all women and children in the society. Right from the age of 7, a boy is trained to be an “unpaid bodyguard” to girls and women. Accordingly, anytime a girl or woman is in distress, one always sees men rushing to her rescue. The fire department, police, armed forces and all other security forces are filled with men. Even in forces where women are recruited, combat and other risky operations are considered the exclusive job of men. The country pays tributes once a year to all the fallen heroes who sacrificed their lives for the country. We also need to remember that the so-called protector too needs certain kinds of protection and support in order to perform his job efficiently on a daily basis. Government should pay close attention to improving working conditions, salaries, housing and professional development opportunities for men in uniform.

Men and boys are always expected to be and conditioned to become protectors and providers. Even though more women are entering the job market and defying their traditional roles within the family and the society, resulting in reduced employment opportunities for men, the society refuses to free men of their traditional duties of protecting and providing for women, children and the aged. Men who cannot provide for the family are considered incapable, unmanly and unfit for marriage and having children. So, men often undertake some of the most risky and challenging jobs in the society and put their lives at stake just to be a provider.  Financial hardships drive thousands of farmers, artisans and providers of crucial services to commit suicide. Treating men as ATMs and expendable commodities is nothing but abuse of their human rights, which must be opposed by individuals, society and Government.

Boys are discouraged from expressing their pain and feelings from the age of 7-8 yrs. This leads to fear of self-expression and even numbness to abuse for the rest of their lives. Men find emotional confrontations extremely painful when they grow up as they are no longer good at articulating their emotions. A lot of men take refuge in addictions like smoking or drinking to combat stress. Most men enduring emotional turmoil in marriage contemplate suicide and a substantial percentage of them (around 56,000 a year) actually commit suicide. Twice as many married men, compared to married women, commit suicide every year. Scientific research is necessary to understand the emotional health issues of men, especially the Indian male. There is a need for psychiatrists and psychologists to specifically focus on issues pertaining to men.

While men in the “productive” age bracket are subject to the pressures of professional competition, family issues and financial problems, one expects that they would be relatively stress-free during their post-retirement years. However, due to the breakdown of the joint family system, and the advent of nuclear family and individualistic culture, more and more aged men are suffering from anxiety, loneliness, financial hardships and despair.  Many aged men also suffer neglect and abuse in their homes, but they appear to be better adjusted than women in similar situations, because men in general are not expressive about their emotions.  Overemphasis on professional and family responsibilities at the expense of their own health, and the ensuing stress could be the reasons why life expectancy of men is much lesser than that of women. As the physical and emotional health of aged men depends, to a large extent, on their lifestyles during their younger years, men need to maintain a healthy lifestyle so that they are more resilient and capable of coping with the challenges posed by age and age-related diseases and disabilities.

Many laws have been made in the last 60 years in the name of protecting women within and outside the home. These so-called pro-women laws such as IPC Section 498A, Domestic Violence Act, adultery laws, laws against rape and sexual harassment and family laws (divorce, maintenance and child custody) aggravate problems rather than mitigate them. These discriminatory laws are anti-male and anti-family, and serve as weapons that promote family destruction and large scale human rights abuses against men, women and children. They are tools of blackmail and extortion in the hands of unscrupulous women, law enforcement personnel, lawyers and judiciary. There is an urgent need to eliminate discrimination against men under law, make all civil and criminal laws equally applicable to men and women, and also to ensure that strict penalties are imposed on those who misuse the laws.

Sexual arousal is easily discernible in men, whereas it is not obvious in women. As a result, men constantly face the allegation of being obsessed with sex. It is also believed that men always indulge in sex voluntarily, whereas women are thought to take part in sex either to fulfill the sexual or emotional needs of men or because they are forced to do so by men against their will. Male sexuality is often attacked to break a man down emotionally. Sexual exploitation and rape of men/boys by women is not acknowledged as an offense, and in fact it is considered as a non-existent problem. Today, male sexuality is ridiculed, insulted, misunderstood, undermined, disregarded, criminalized and everything but respected. Proper awareness on male sexuality is very important for both men and women. Provisions and laws for protection against sexual assault and abuse are as necessary for men as they are for women.

International Men’s Day is an occasion celebrated the world over with the following core objectives:

Since the inception of International Men’s Day (IMD) in 1999, the number of countries celebrating the occasion has been growing every year. While India joined the celebrations in year 2007, the number of nations observing IMD has crossed 40 this year.

In India, awareness about IMD is increasing, with more and more cities and organizations conducting public celebrations in the form of setting up websites and blogs, organizing road shows, vehicle rallies, meetings and conferences. This year too, many similar public events are being organized across the country to include men and women from all walks of life and to encourage everyone to celebrate and honour the men in their lives.

In Hyderabad, All India Men’s Welfare Association (AIMWA) and All India Forgotten Women’s Association (AIFWA) are organizing a gathering of men and women on 18 November, from 10:00 a.m. to 1:00 p.m. at the Basheerbagh Press Club where experts in various fields will be speaking about the physical and emotional health of men, issues men face as protectors and providers, problems men encounter during their old “unproductive” age when they cease to be protectors and providers, discrimination against men under law, devaluation of men’s lives and the growing disdain and disrespect against male sexuality (See invitation for details). The valuable inputs of these experts will be compiled in the form of a Resolution, with a list of necessary measures and achievable goals.

The highlight of the event would be “Celebrating Positive Male Role Models”. We will be honouring three ordinary men who have been doing extraordinary work in the areas of academic, civic and spiritual education, respectively.

On 19 November, we will request a brief audience from the Governor of Andhra Pradesh, to personally greet him on the occasion, and to submit a memorandum seeking the establishment of a State Commission for Men, so that we become the first State in the country to dedicate a government body to men as an acknowledgement of the many positive contributions, services and sacrifices our men render to make life comfortable and secure for everyone within the family and the society.

Through the memorandum, we will also request the Government of Andhra Pradesh to develop, sponsor and support programs for 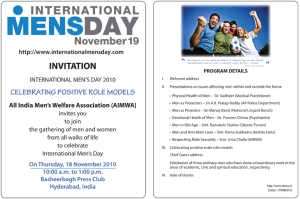